Trente et Quarante (30 and 40), also known as Rouge et Noir (Red and Black), is a French casino game. The game originated in the 17th century and is interesting mainly for the two reasons: (1) it is a specific card variation of the famous Roulette and (2) the game gives house quite a small advantage – in other words it offers a good return for players.

Trente et Quarante is played with six 52-card decks on a special table – see the picture below. You can bet on four kinds of wagers, while all of them are paid out as even, that is in the ratio 1:1. The wagers are: Red (Rouge), Black (Noir), Color (Couleur) and Inversion (Inverse). 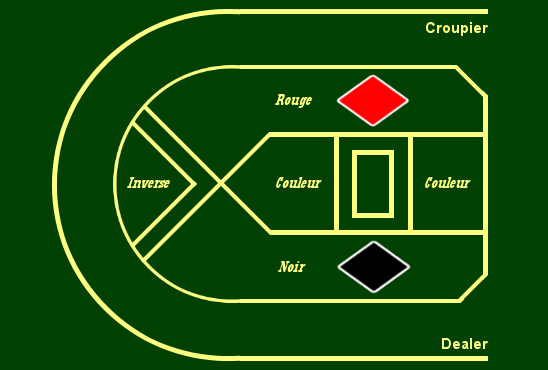 Figure – A half of the Trente et Quarante table

How to play Trente et Quarante?

The game of Trente et Quarante begins as follows. A dealer deals two rows of cards that represent Black and Red colors. The cards are dealt face side up, i.e. visibly – see the illustration below.

The Black row is first. The dealer adds more cards as long as the value (or the sum) of the cards equals or exceeds 31. The figures (J, Q, K) count for 10 points, Aces for 1 point, numbered cards have their specific value. The winning value always ranges from 30 to 40 points – this is where the name of the game comes from. The final value is announced by the dealer.

Afterwards the dealer deals the second row representing Red color. Again, the cards are dealt as long as the value reaches or exceeds 31. The value of the row (either Black or Red), which is closer to 30, wins the game. The Color wins if the first card has the same color as the winning row. The Inversion is the opposite wager. It means that the first card has to have the opposite color than the winning row.

Illustration of the Game and Wagers Assessment

The tie occurs when both rows reach the same value. In this case the bets remain on the table – with one exception, which will be addressed below – and the players have two options. Either they take back a half of their bet (another one falls for a casino) or they let the whole bet on the table and its fate will be determined by the next round. Now if the bet is successful, it is returned to the player. It is a similar principle as in case of zero in Roulette.

The exception related to the tie (Refait) happens if the tied value is 31 points (called as Un aprés), when the casino grabs a half of the bets automatically. This is the only profit (or share) of the house, which is, in comparison to other casino and gambling games, very low and makes up for only 1.25%.

In a statistics point of view the tie at the value of 31 is the most frequent, it happens approximately once in 41 games. The maximalists can even insurance against the tie. The insurance fee is 1% of the bet and decreases the house edge below 1%. A conclusion? Trente et Quarante offers very good winning chances for the players.